I’ve been restoring furniture and carrying out front door restorations for over 30 years. As a child my dad would try to get me enthused about projects he would be doing around the house (see – Why Us?).

These memories have given me a great passion for making something good again. Sometimes restoring a Victorian or Georgian front door is challenging but when you make a door beautiful again after years of neglect, it can be a very proud moment.

In a cul-de-sac where all of the front doors are the originals, we had to deliver on this one.

The main thing with Tania’s door was that the glass was really bowed. Furthermore, it had 9 breaks. Although we could have simply made new stained glass, it HAD to be the original.

I flattened the glass, replaced or fixed the broken pieces and resoldered all the damaged lead joints then re-cemented the whole thing. Hopefully, her review reflects her joy.

This Victorian original front door was looking tired and was draughty, the glass wasn’t quite what she wanted.

Taking inspiration from a neighbour’s front door glass, we made this harlequin style leaded glass above.

We painted the door to last many years and the new chrome furniture really makes the door look grand again.

Sophie’s young daughter looked through the gap in the middle panel and said hello to me when I first visited. She was a bit upset when I told her that her spy hole wouldn’t be there when I’ve finished restoring the door.

After stripping and painting the door in this beautiful duck egg blue I made replicas of the 6 glass panels, the old ones were buckled, the perishing lead broken in parts with wind getting in.

The transformation is amazing, even the three daughters were thrilled.

When I tell you guys that I love doing what I do it’s not just the craft, for me it’s more to do with people. Front door restorations don’t come much nicer than this.

Phil called me some years ago and asked if I could make or find him some quite unique internal doors. He explained what he wanted and I scoured my suppliers’ catalogues, and the internet. I found exactly what he wanted from a company in Ireland and put in an order.

While I was at the house I was asked to refurbish the original front door which having been on the self build house since the 1950s. The new outer doors protected it now but over the years it had had some battering.

Being under cover however, water rarely got to the oak and the tanins had hardly been oxydised (oak goes black when it befriends water). It sanded down lovely and I restored the original furniture. A few thin coats of the clearest water based varnish now keeps it safe.

I can’t take credit for the beautiful glass, that was the fruit of some master long gone.

Phil’s wife is the only customer who has ever kissed me on the lips to say thank you!

That’s not an invitation 😂 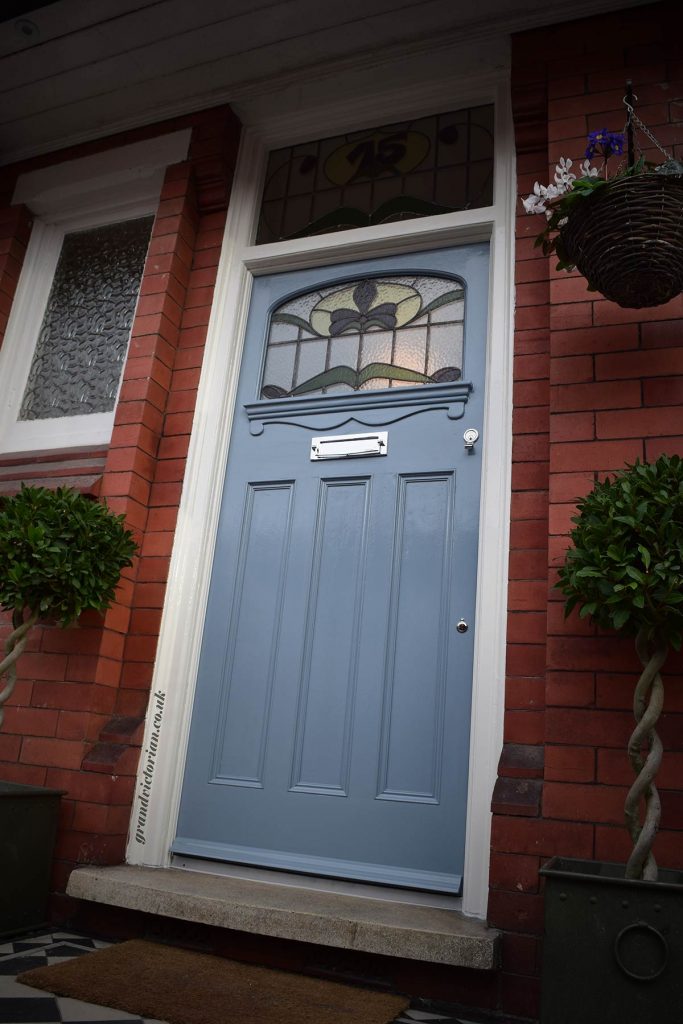 Blast from the past…

This is Sam’s 1930s front door in Didsbury. Unique as it looks, it has 21 siblings in a small cul-de-sac near the village.

Because the glass matched the side window you see above, I made a rubbing from one of the neighbours’ doors, matching up the colours, et voila so they say.

Since there was no original fan light in the street (or they all started out plain 3mm glass), I thought I’d design one 😬 and of course double glaze it like the door.

Front door restorations usually mean I spend a lot of time with the customer getting an idea of what the would like and expect. I think I saw Sam for all of 5 minutes throughout and lost his number a long time ago, never got the chance to ask if he wanted the side window to match – so if you know him ask him to get in touch 😉. 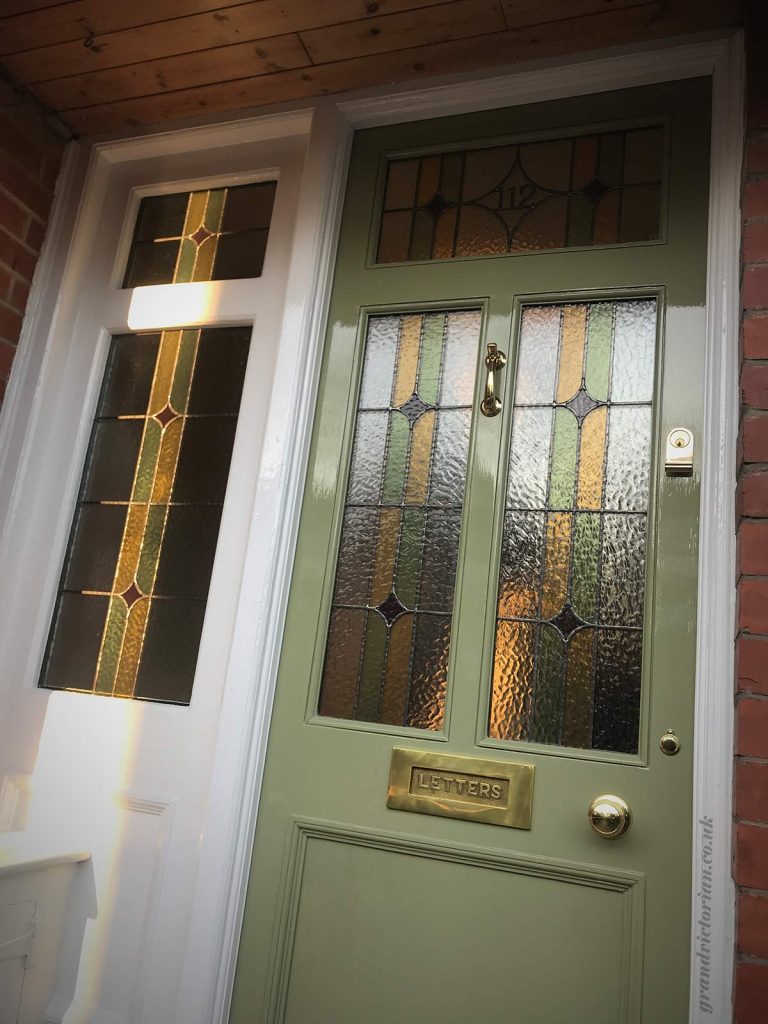 I know, it’s only a small bit, but I really do feel like I’m part in the retaining tradition and restoring Manchester.

Kristen, who’s a doctor at Manchester Royal Infirmary bought her house in West Didsbury and I guess had dreams of having a pretty sympathetically restored Victorian home in the heart of a great city.

When she gave us the job of restoring her front door she made another splendid decision and putting the hundred snags we had with the door, glass and what-have-you (which I won’t mention LOL) I think we’ve done a fine job fitting in with the dream.

It’s always nice to read what you think… 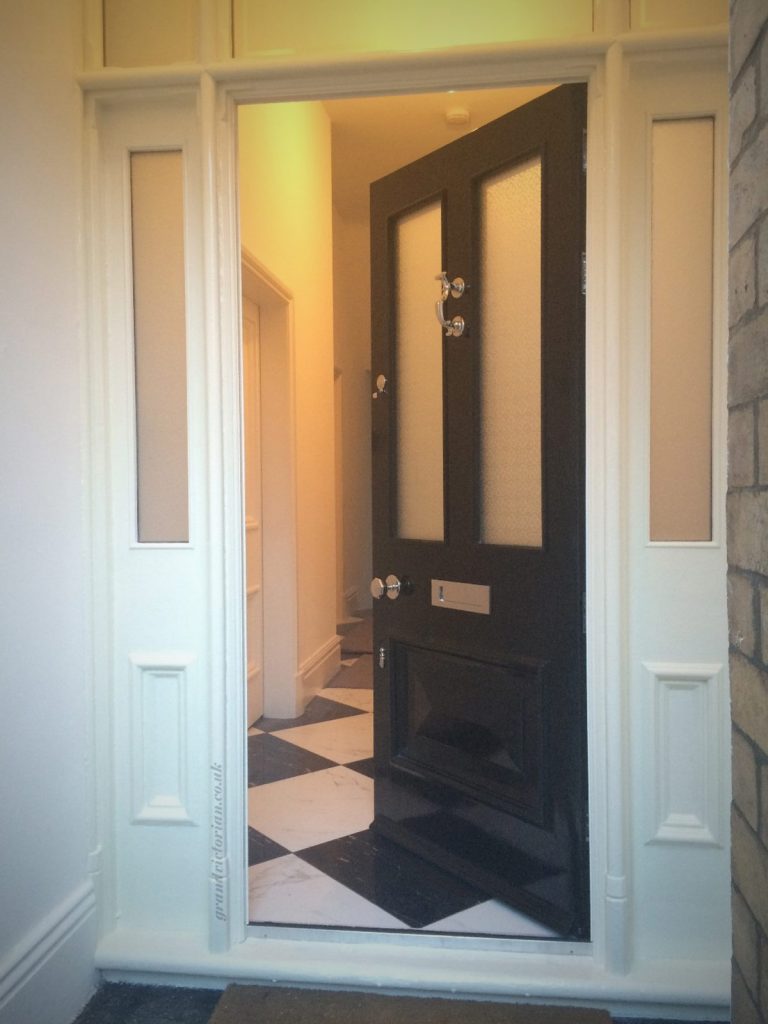 This Victorian front door restoration took forever. So it seemed at the time. The day he started this 4 floor renovation of this beautiful semi in Didsbury he counted out the deposit in cash on the mantel and I took the door away.

Six months in, after he was stung by a rogue builder, we continued and took away the 11 internal doors to restore (another cash deposit) and didn’t return for over 6 months when the decorator took on the mammoth task of painting the whole house.

I imagined he’d be there for another 6 months! 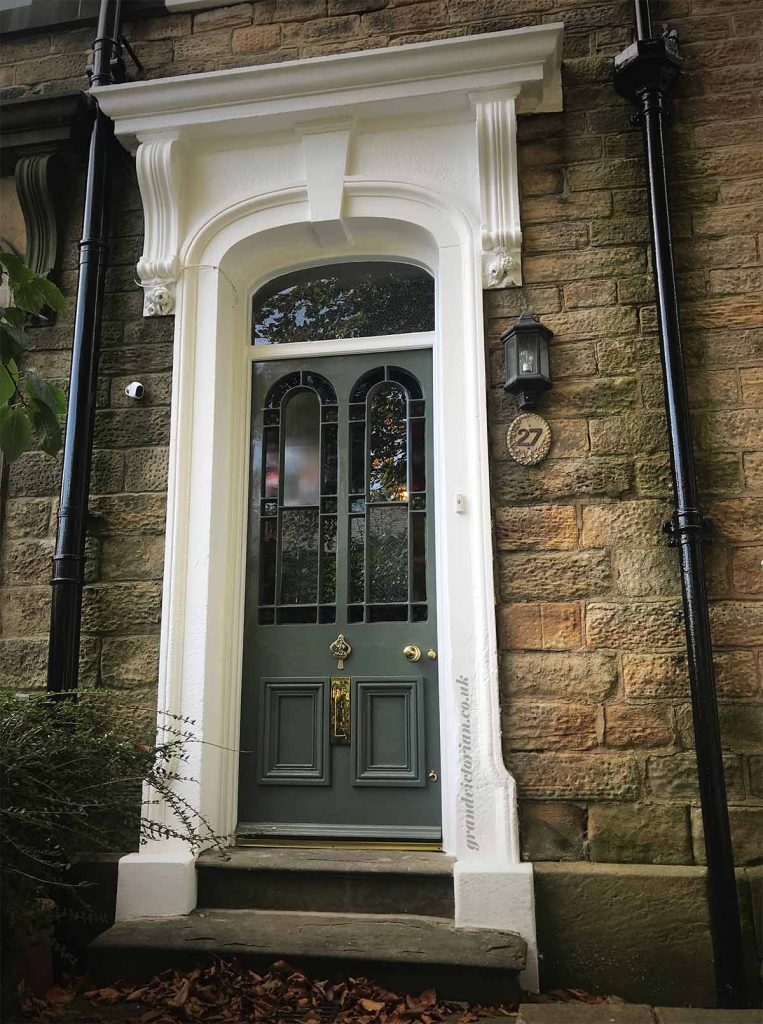 The beautiful stained glass in this door needed a few pieces replacing as they were broken. Take a closer look and see if you can spot the ones I painstakingly replaced!! 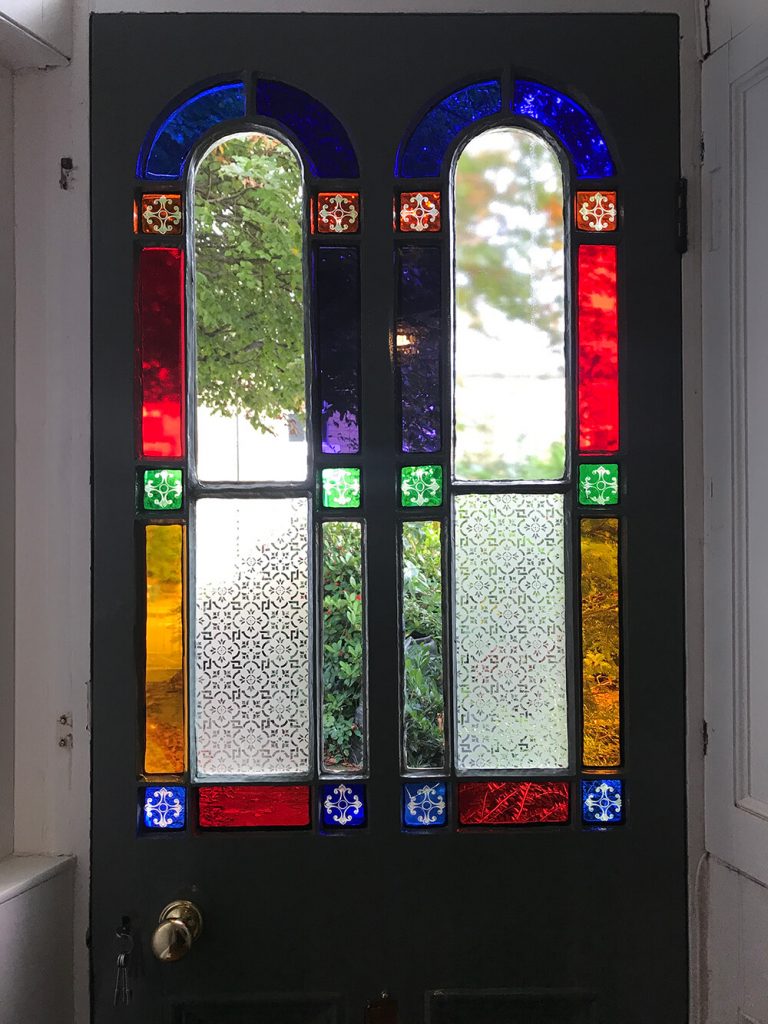 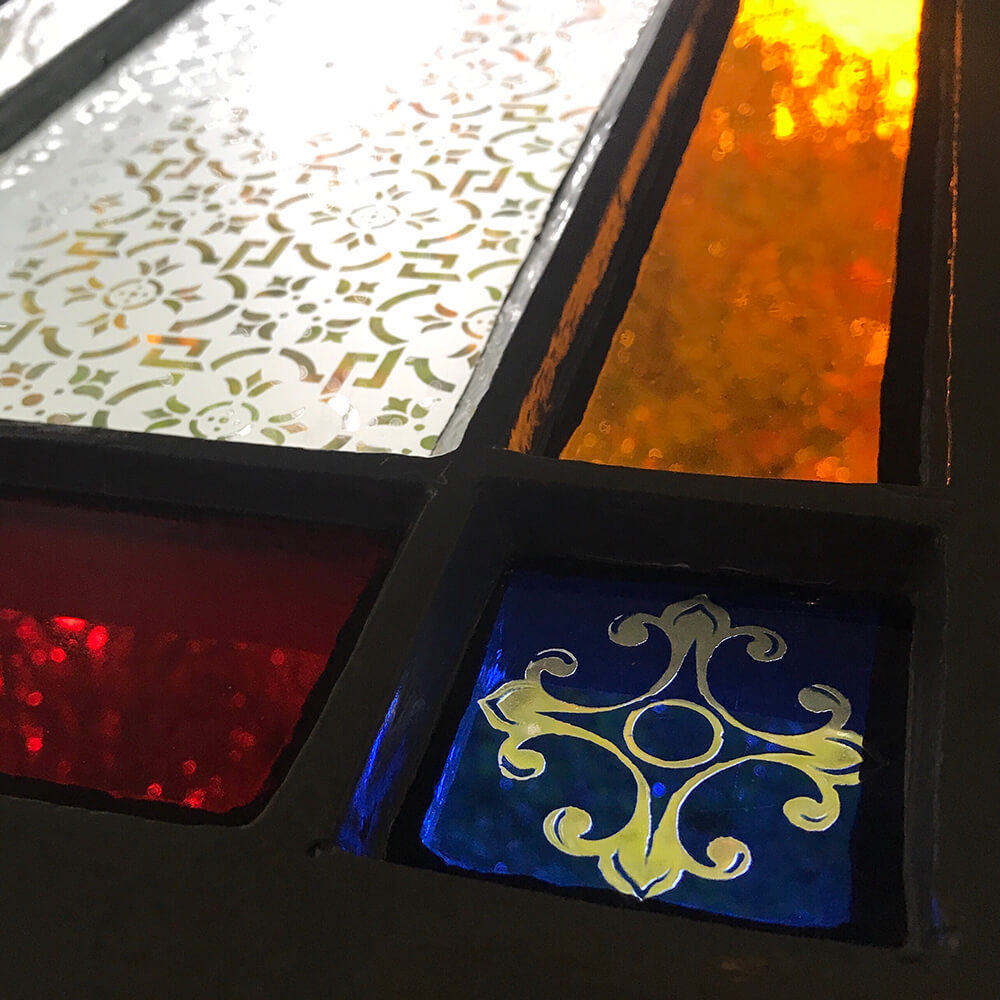 We restored this door in Sheffield and polished up the original brass furniture including the leprechaun knocker. The letter plate is new.

If you’re questioning whether yours can be done this is the perfect example I think of how good an old knackered door can look.