I’d been looking for the right person, and door, for nearly two years to present Manchester Bee leaded glass to as a concept for glazing their front door.

We now officially have the licence to produce Manchester Bee leaded glass so we can offer it as a very limited edition project. This is the first.

A STORY OF SURVIVAL AND RESTORATION

Nicola contacted me earlier in the year and expressed a desperate need to have the front door restored. The house had been in the family since the terrace across from Stamford Park, Altrincham in 1900. Now Nicola’s daughter Imogen is living there with partner Joe.

We set about restoring the front door by installing a temporary door. After a few tweaks to the old original door I took it away to have the paint stripped. We carry this out in our workshop in Bolton with a heat gun. This way, we can take more care around the mouldings.

When a door is ‘dipped’, the process can dissolve the glue used in constructed. Therefore, we don’t dip. I’ve even seen someone use a wire brush around the beading to get the rest of the paint off.

Using a hard brush makes the grain in the wood show way too much, and it looks terrible. When you use a heat gun, you can take your time on it and put a little more TLC into the whole operation.

The front door at number 49 Mayor’s Road in Altrincham is the original. The Victorians built the house in 1900. A lot has happened since then. For example, the door survived the ‘Manchester Blitz’!

Hitler’s Christmas presents for Manchester came early. On the very first day of the World War 2 ‘Manchester Raid’, 23rd December 1940, a bomb landed at the gateway of Stamford Park. This is only 40ft from number 49. The corner shop was severely damaged and windows were all blown out in the surrounding houses by the blast.

The two glazed panels that were probably fit after the war, and the fan light, were perfect candidates for my Manchester Bee leaded lights.

I sent Imogen a photo of my sample Manchester Bee and asked if it ‘was her’. The words phenomenal, brilliant and happy were used and off I went to get the pencil out.

Meanwhile, Paul strips 119 years of paint from the old pitch pine door. This process can take a couple of days but even then there is usually quite a lot of filling and sanding required. The real painting won’t be started until the following week.

While the door is bare we’ll leave it for a few days to dry out completely before we seal it with it’s first proper coat of paint. 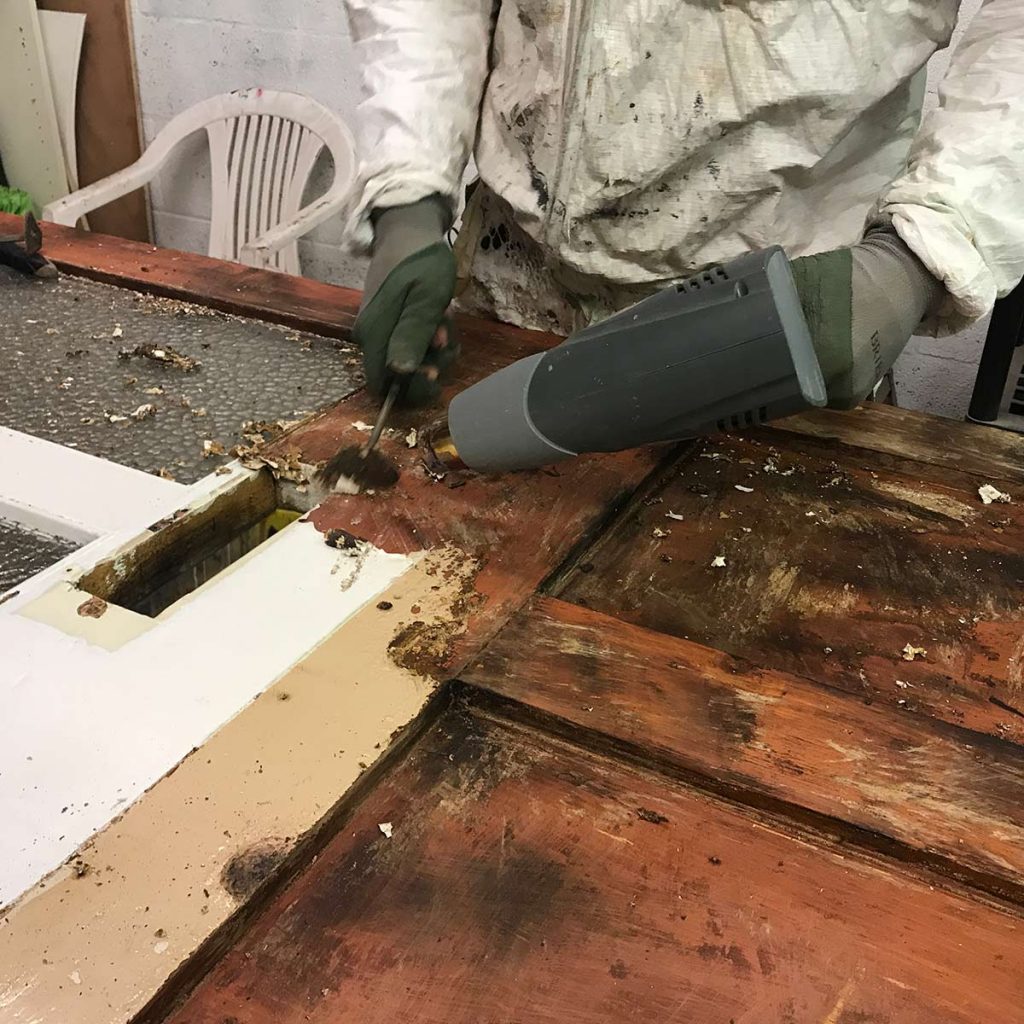 After some joinery wizardry, Shawn and I hand the door back to Paul for painting.

Dulux can’t help me with the right navy blue that Imogen desires. So, I mix my own. It’s so good that this will be the ‘Grand Victorian Midnight Blue’ from now on, love it.

CORRECTING A COUPLE OF BODGES 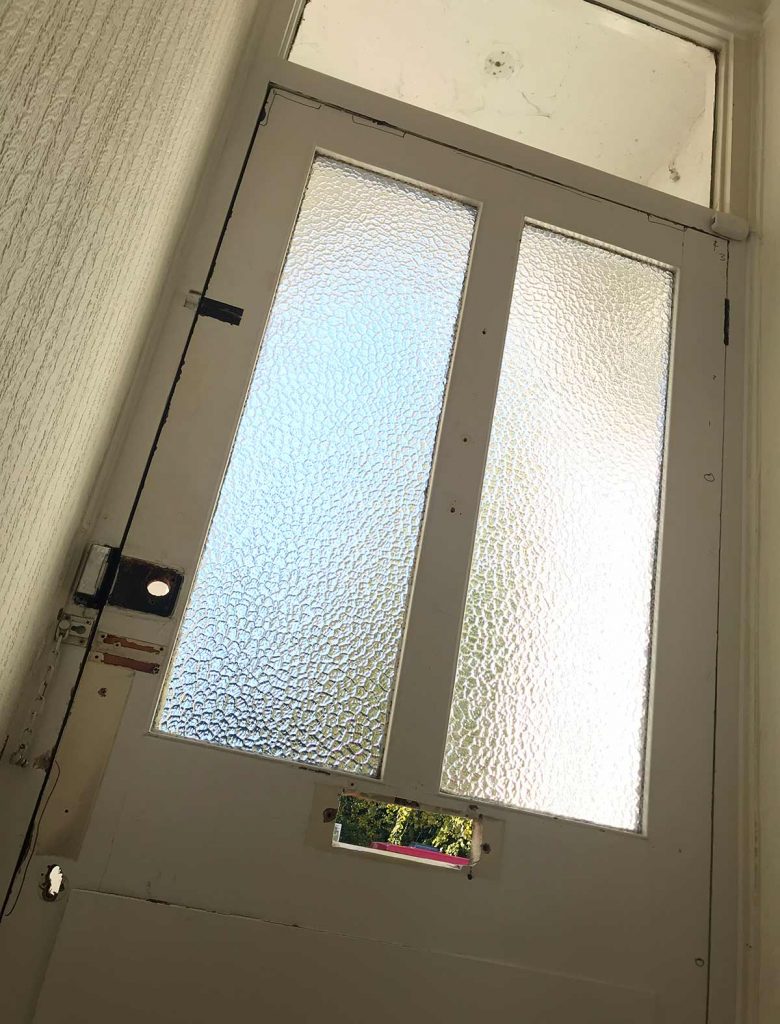 A flat hardboard panel had been fitted to the back of the door. This can be seen in the above photo. It covered the simple but beautiful detail of the back of the two lower panels. A travesty, but they’re exposed now for everyone (inside) to see. Because of this Nicola and Imogen had never seen the inside of these panels.

You can see from the first photo that the letter plate was unusually high in the mid rail. Although it’s an extra day’s work, I designed a ‘shelf’ for Shawn to make to cover the hole.

The new PVD coated letterplate will now fit in the middle of the rail, where, in my humble opinion, it should always have been. It’s just soooo beautiful and unique.

I’ve made a few of these shelves now, each time to cover a misplaced post hole, and they really add some character to each of the doors.

The Manchester Bee has been a symbol of industry in Manchester for 150 years, more so since the town became a city in 1942. The Bee now has international superstar status after the Manchester Arena bombing in 2017 where 23 people died. The shock wave shook the whole of Manchester. You can’t walk down a main road in the city without seeing him somewhere. He’s often stuck on the bumper of a car, in a shop window or represented by a sculpture by a local artist.

It’s bitter sweet but he’s become a sign of strength and unity in the Greater Manchester.

In the design room I employ a compass and a protractor. I spend hours fitting hexagons into rectangle holes. I think I’ve got it sussed and I send a drawing to Imogen to get the OK.

The lead hits the glass with a splash of yellow here and there, every joint is soldered. I then ‘age’ the lead-work with an acid for authenticity. Leaded lights have usually had decades of oxidisation so they look much darker than new lead. We can’t wait another hundred years for our doors to look right.

My lead-work sits on the outside of the double glazing and most would think it’s traditional leaded glass. Believe me when I say this isn’t the easy option. Each leaded light still takes a day to complete, sometimes more. 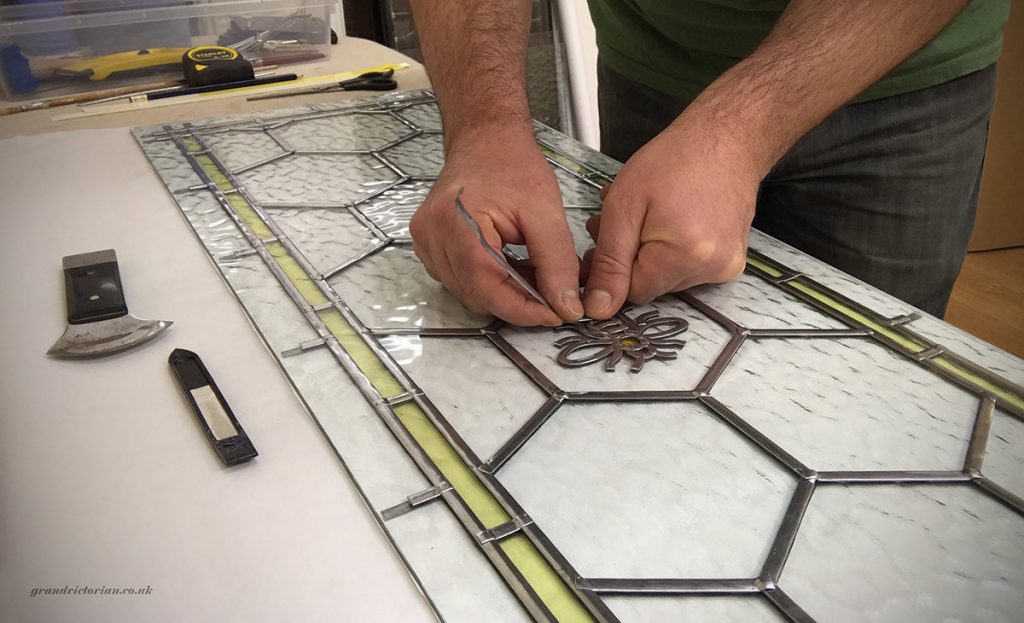 Below I’m finishing off the Manchester Bee leaded glass fan light with an acid to age the lead and soldered joints.

Shown below is the finished restoration of Imogen’s Victorian front door.

Firstly, the navy blue that I couldn’t find in either Dulux or Crown. Disappointed, I mixed the deep blue myself and I think it’s just right with the solid brass door furniture. 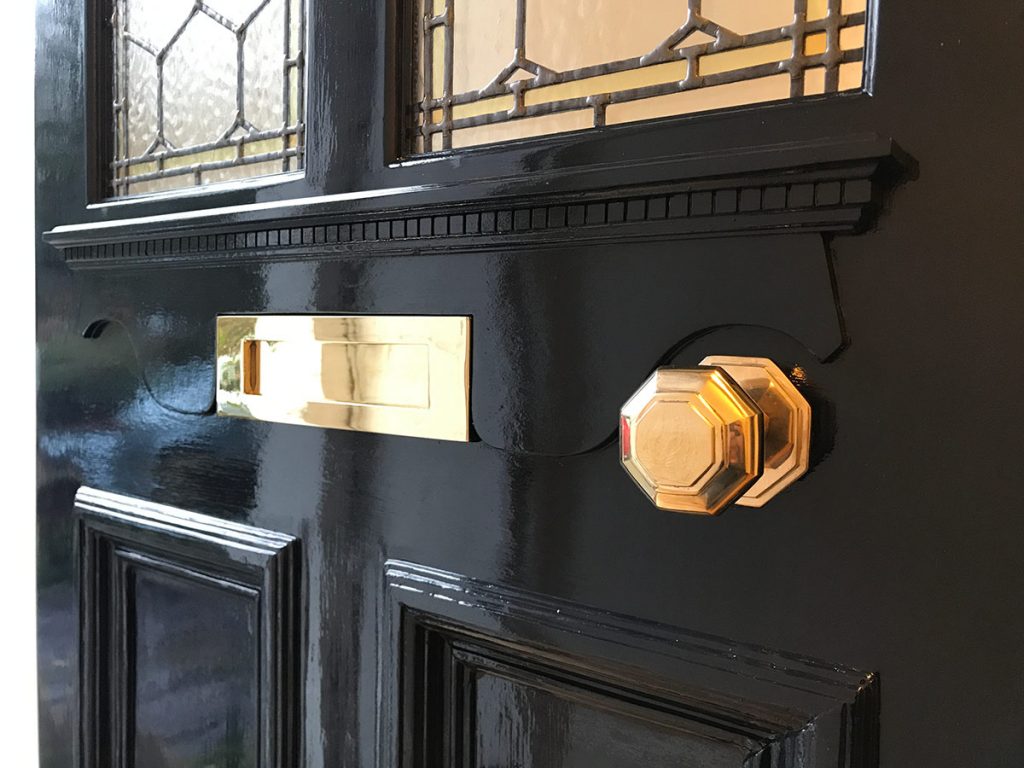 The rose knocker is from Carlisle Brass, as is the PVD coated brass letter plate. Also, the octagonal door knob looks lovely on these old doors, especially against this dark blue. 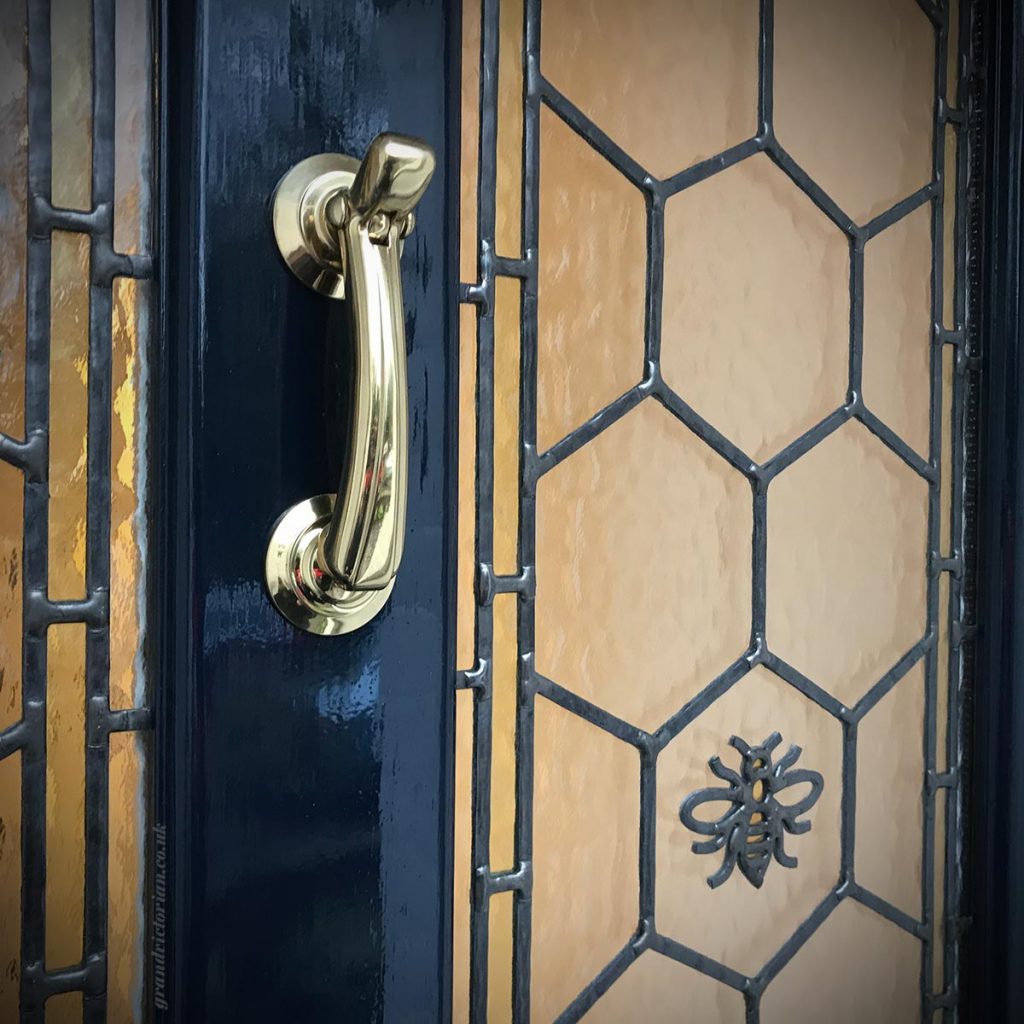 The Manchester Bee looks so good in the night with light from inside the house, a nice welcome home for someone with a key. 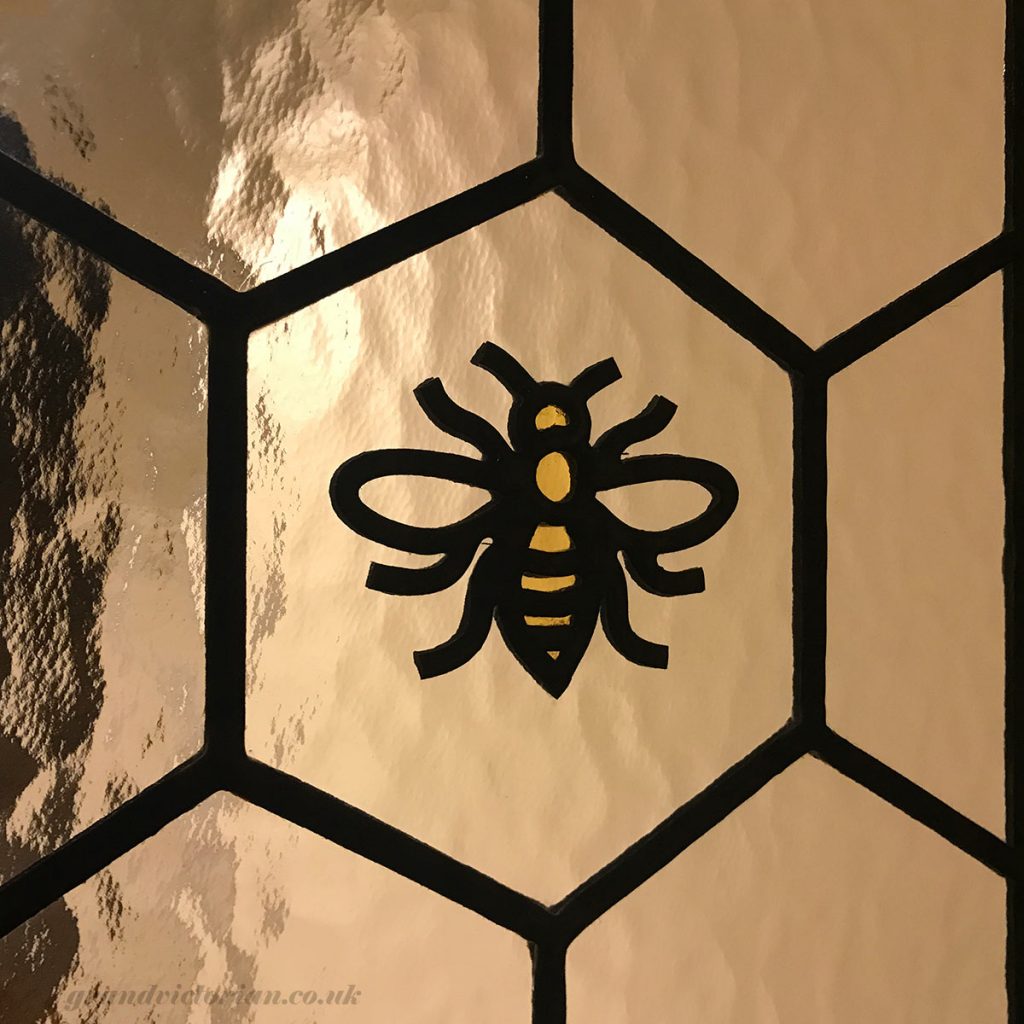 Below is the front door glass and fan light as a whole at night, homely and warm. 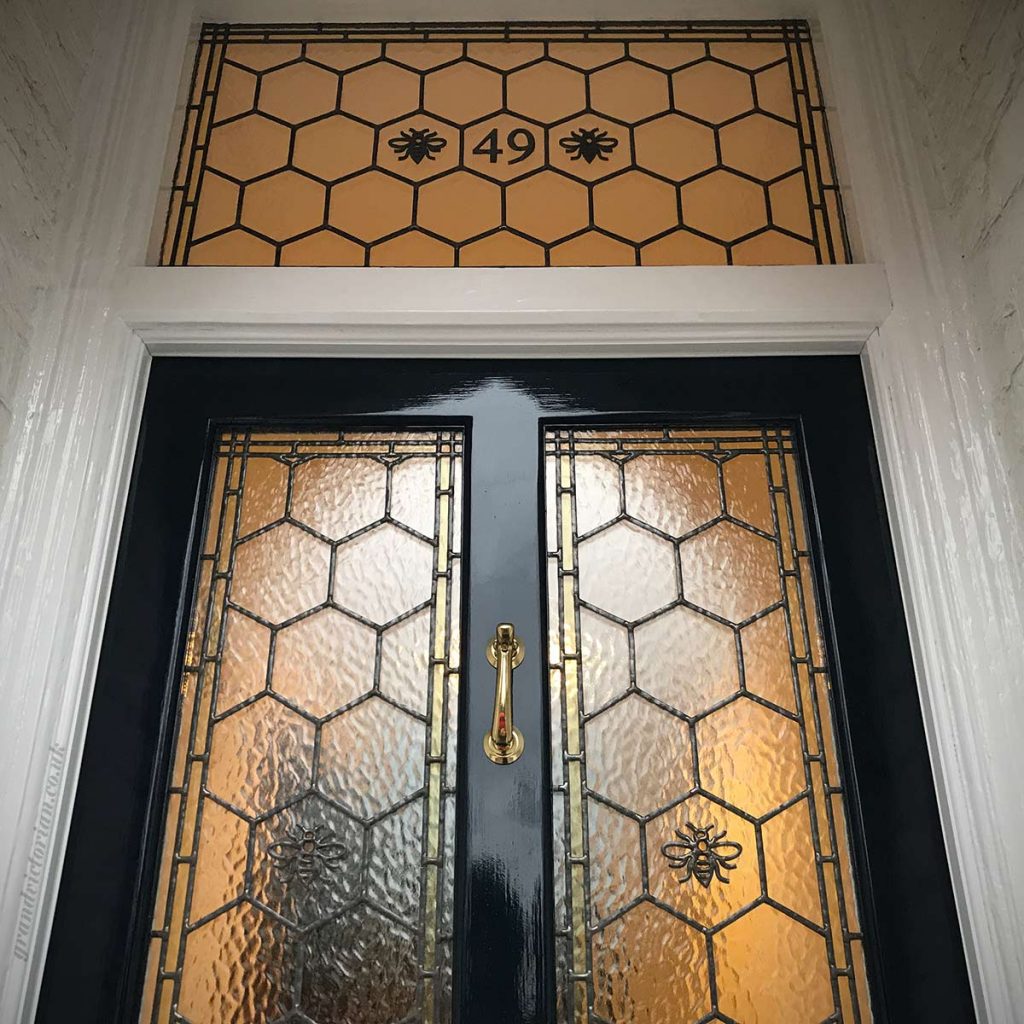 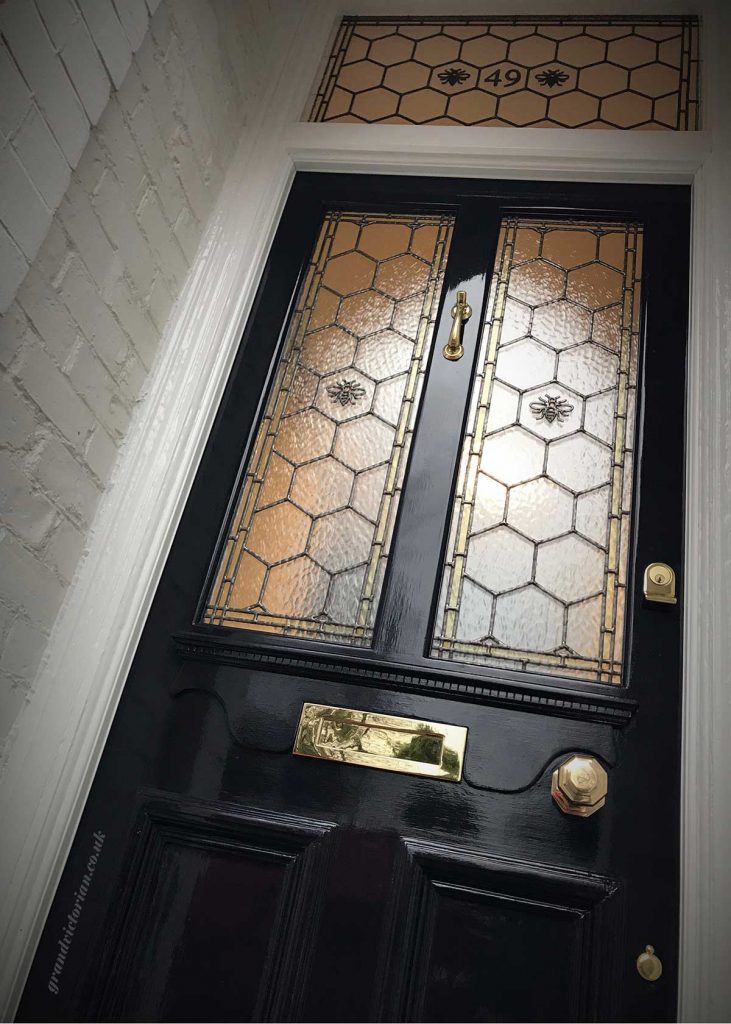 What a great project to end a tough year for me. With Paul and Shawn joining the team, 2020 looks like it’s going to me a great year. Keep watching for more amazing restorations, they’re only getting better and I hope Imogen’s door shows this.

If you would like the Manchester Bee leaded glass please CONTACT US. We can supply a unit without making you a door.

How To Clean Leaded Windows

Every wondered why the lead in stained glass windows goes dark and grey? This article will help you in cleaning your leaded glass. 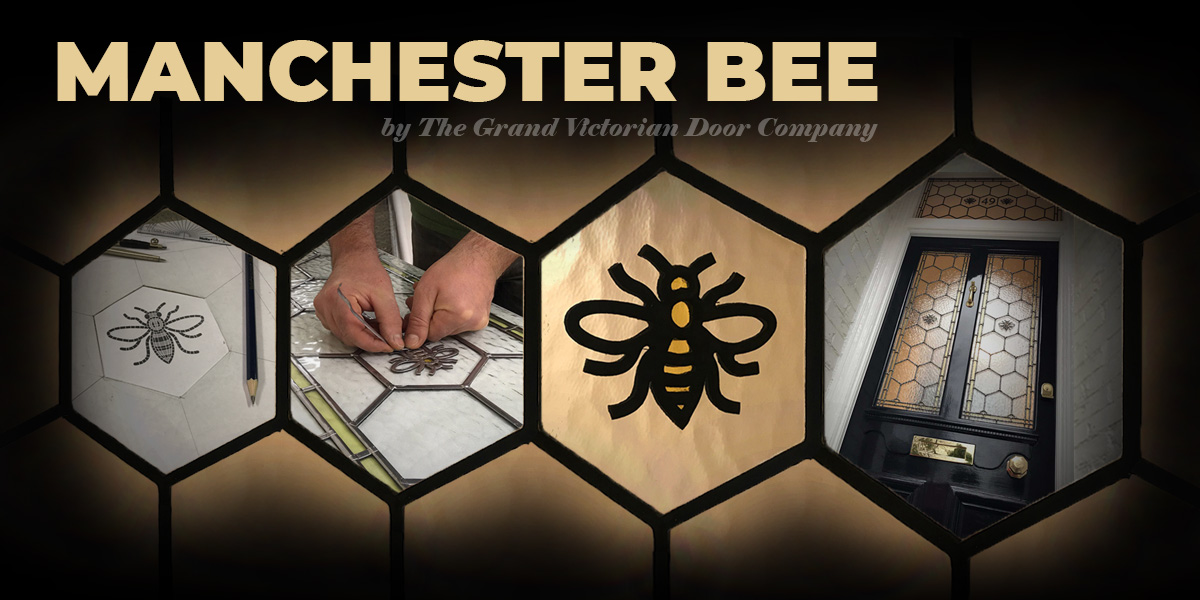