Generally defined by Queen Victoria’s ascension to the throne in 1837, the Victorian era lasted for almost 64 years up until her death in 1901. This period is marked by sweeping changes in society, industry, politics, and class in the United Kingdom.

The Victorian age heralded in a rapidly growing middle class, paired with a booming industrial revolution, that allowed innovation to prosper. With further excursions into India and parts of Asia, there was an ever-growing demand in England for the exotic and opulent.

A domain that most outwardly belies the fundamental shift in English culture is the architecture of the time. In the French and British tradition of naming architectural eras after the reigning monarch, Victorian-era architecture was established. Victorian architecture is a broad term encompassing 60 years of overlapping architectural styles including early Gothic Revival, Italianate, Second Empire, Exotic, and finally drawing to an end with the popular Queen Anne style. 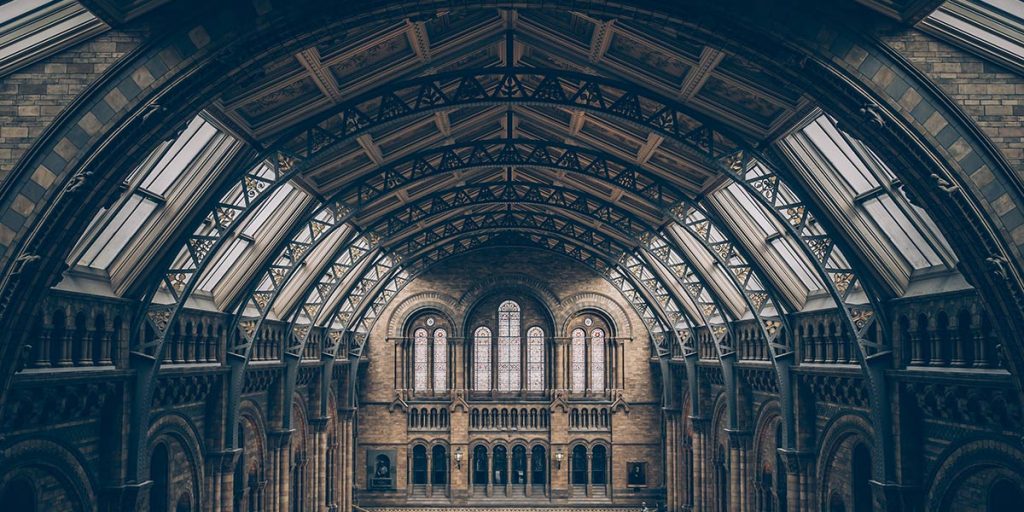 An important factor contributing to the rise of Victorian architecture is the creation of new technology that allowed steel beams to be used during the construction of buildings. The introduction of steel beams into Victorian houses allowed for higher reaches of construction. This newfound ability lead to the construction of three or four-story buildings. Due to the large influx of people into cities during the industrial revolution, these tall yet slim buildings were in high-demand to house factory workers.

Plate glass also arrived in 1832 which allowed for larger window panes to be used in houses. The wide and clear windows of Victorian houses can easily be distinguished from those found in Georgian houses. Georgian windows tended to be composed of smaller panes attached to each other.

The growing desire among the emerging middle class for luxury and novelty is represented in the often unnecessary adornments and embellishments that are common to Victorian buildings. An example of this can be seen in the decorative bargeboards of some Victorian homes. Decorative and high gables paired with a sharp roof indent are also remarkable Mock timber framing was often incorporated into gables for this very reason. All of these ornamental details were often contrasted with the use of colourful bricks. Previously unseen in Georgian architecture, red bricks were frequently used in the construction of Victorian buildings. This architectural style can most famously be observed in the Royal Albert Hall or the Victoria Building, University of Liverpool. Furthermore, a varying array of bricks was often used to create colourful stonework designs throughout Victorian buildings.

Perhaps owing to the dynamic and increasingly liberal environment of the Victoria era, the rules that had dominated Georgian architecture rapidly dissipated. Naturally, this pivot coincided with the introduction of asymmetrical house designs that are a stark contrast to the more ‘cliff-side’ flatness of most Georgian houses. This gave rise to more complex and decorative designs. Porches were just one of the complex design features that heralded in the novel asymmetric style during the Victorian era. 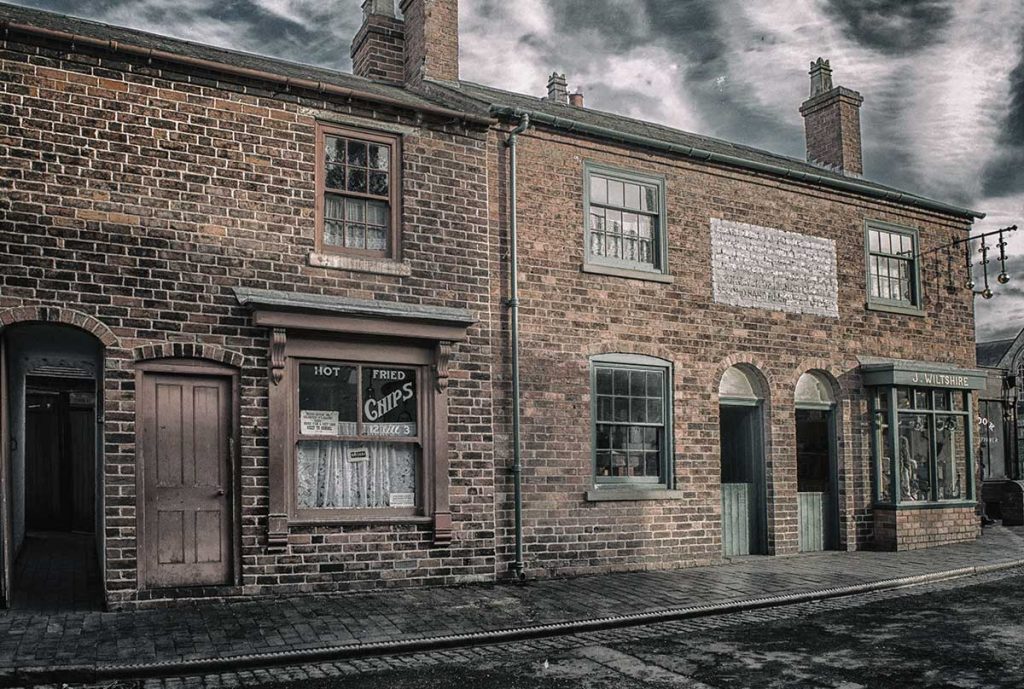 One of the more notable characteristics of Victorian buildings, especially in houses, are bay windows. These windows that jut out from the main walls of the building could either be double or single depending on whether they appeared on both the first and second floors or together. Bay windows are also a contributing factor in the asymmetrical design of Victorian buildings. 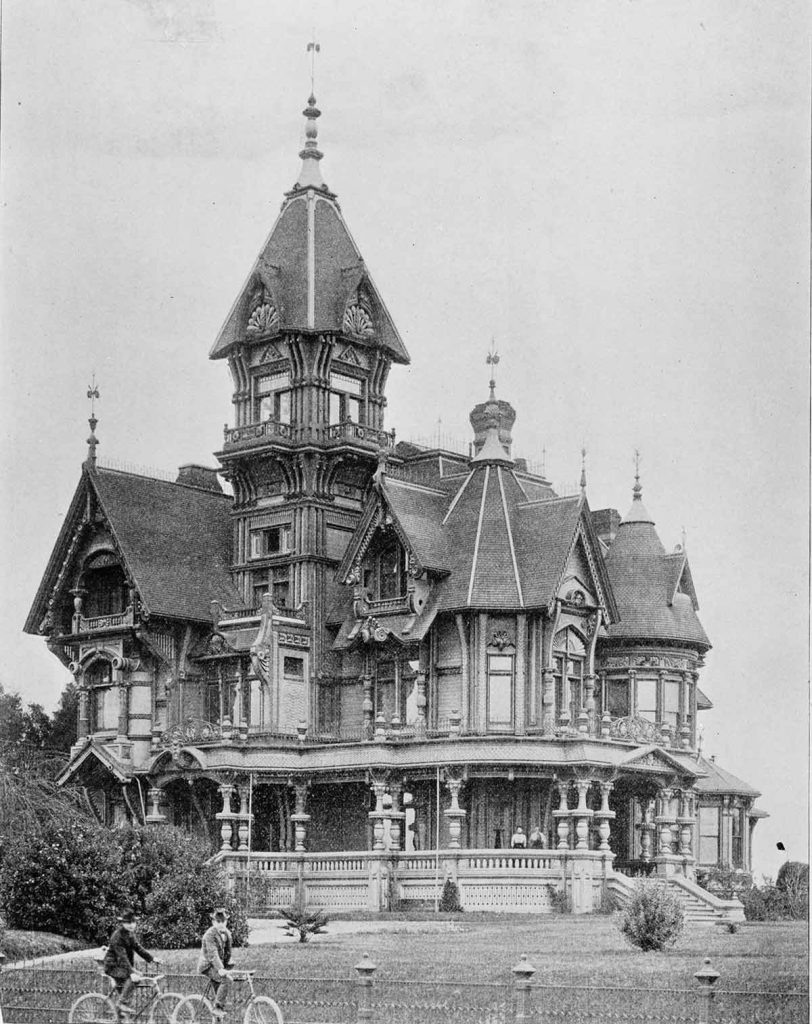 Other factors that could result in a lack of symmetry for Victorian houses are the towers and turrets that were often used as a substitute for the more traditional roof. These tower-like roofs are after seen in corner buildings which were rounded with the strategic use of Bay Windows. This is just one example of the immense ingenuity and innovation that is prevalent in Victorian architecture. The use of turrets and towers is most clear in the large Victorian house located in Eureka, California, which is considered the grandest Victorian home in America.

The existence of a Victorian house in America is due to the extensive travel and emigration being undertaken by the English during this time. There are a multitude of Victorian buildings, houses, and structures found in countries such as New Zealand, India, Canada, and around the globe.

The grand splendour and intricate designs native to Victorian architecture evened out in the late 19th century resulting in a more understated yet elegant style.

BUY DOOR FURNITURE WE USE