Alexandra’s front door in Waterloo was knackered, draughty and rotting. Her new Grand Victorian front door is not only draught free, solid sepele and strong but holds her old traditional leaded lights from the original door.

Secured with Banham locks it also has one of our brass Aslan door knockers and a new door bell.

This front door of Diane’s in Wilmslow was a classic example of what our Grand Victorian should look like but behind the scenes I’ve changed thing a little since.

Diane insisted that everything in the house should be Farrow & Ball, the front door was no exception, we painted it in their Babouche yellow, but it took far more painting that should be necessary. Three coats of gloss because it doesn’t cover well is one thing!
The decreasing number of people who make stained glass means that they always have a lot of work booked in and even when I’ve been given a completion date they’ve never stuck to it so I made solid panels for the top and they were fitted with the door for 6 weeks before I could fit the glass (which Diane ordered by the way).
Although the glass is traditional stained glass it HAS to be encapsulated and so flat glass on the outside to me just doesn’t look quite authentic enough. To have exposed lead I do my glass in a different way, if you’re interested why take a read of the article below…
In all, Diane’s door looks classic, fantastic, like it’s always been there – I think you’ll agree.
https://grandvictorian.co.uk/21st-century-leaded-lights/

Katherine’s massive front door in Leeds was as rotten as they come, when I first went round to measure up I had to kick the front door in to open it.

This is our Grand Victorian front door with flat panels and bolection mouldings. I designed this door right back at the beginning of it all to look authentic on homes going back to the early 19th century. It’s been very successful over the years and tomorrow I’ll show you one that, using glass and door furniture, suits a more ‘metro’ couple in Altrincham.

The furniture here is from Croft Architectural Hardware, hand forged in England with a marbled brass finish.

I fitted this door earlier this year. After the decisions were made regarding colour and furniture everything went like clockwork. Of course, carrying an 80kg door up 4 icy sandstone steps on my own wasn’t a breeze!

If you want your door to stand out then I can’t imagine a colour to help you do that more than this shocking pink, I always wondered what Katherine’s husband thought when he got home. 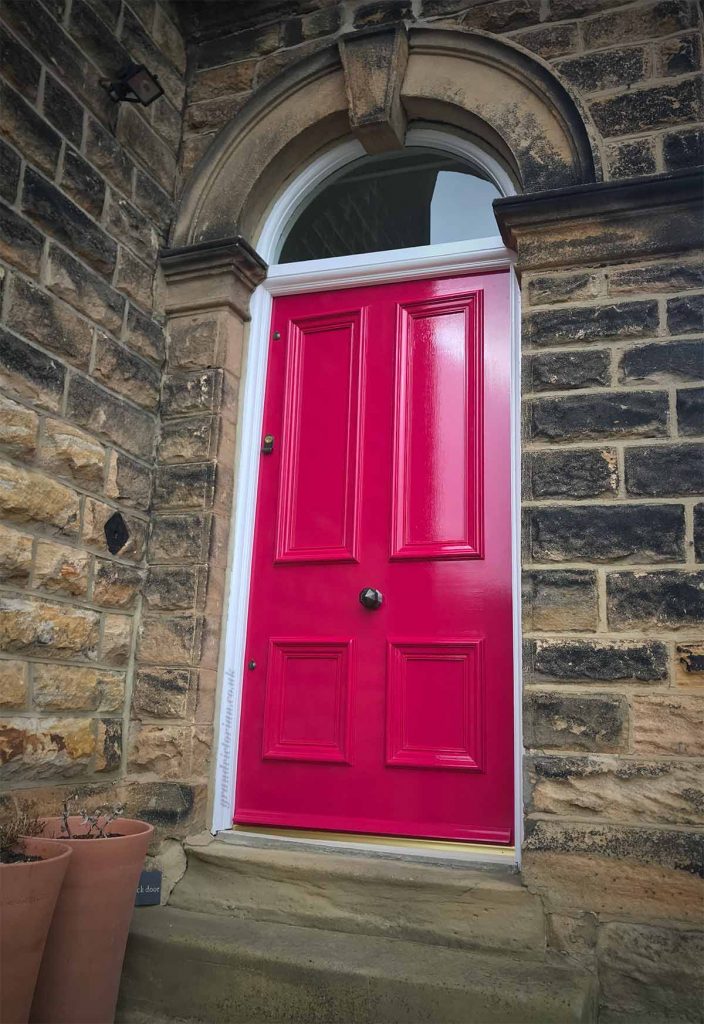 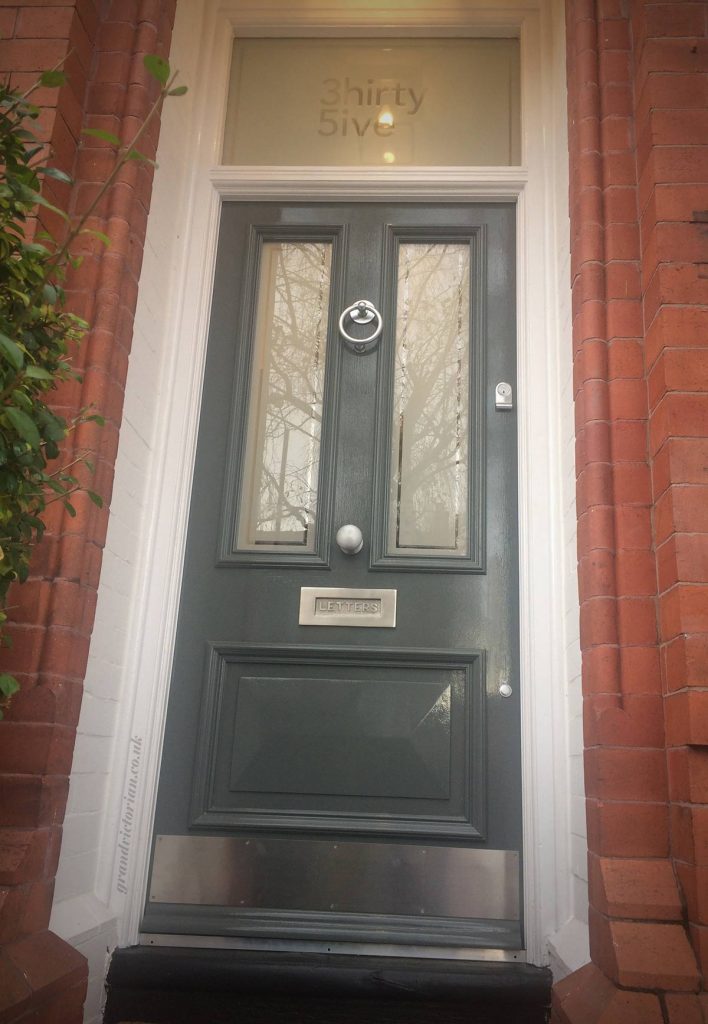 Will’s a graphic designer so his focus was having a his own stamp on the project. He did this by designing the ‘number’ in the fanlight, he even provided three formats of the design.

We focused on the dimensions of the door and getting that diamond panel at the bottom just right. I love this door, I think it was a mix of really nice customers who had just bought their first home, the gratitude and the lighting when I took the photo, everything about it was so nice and I fit it just before Will & Harriet’s house warming party at Christmas 2016.

The sand blasted glass is very simple (although I’ve seen it done badly by glazing company’s that don’t seem to care) but it makes my Victorian front doors look so modern, a 21st Century slant on 19th century styling.

Grey is really in at the moment and this was our first Farrow & Ball ‘Downpipe’ door, although it’s a Dulux Weathershield mix. When I call round for you to select a colour I’ll bring loads of coloured blocks to stand on your doorstep so you can see what they will look like on your door. Downpipe will definitely be one of them. 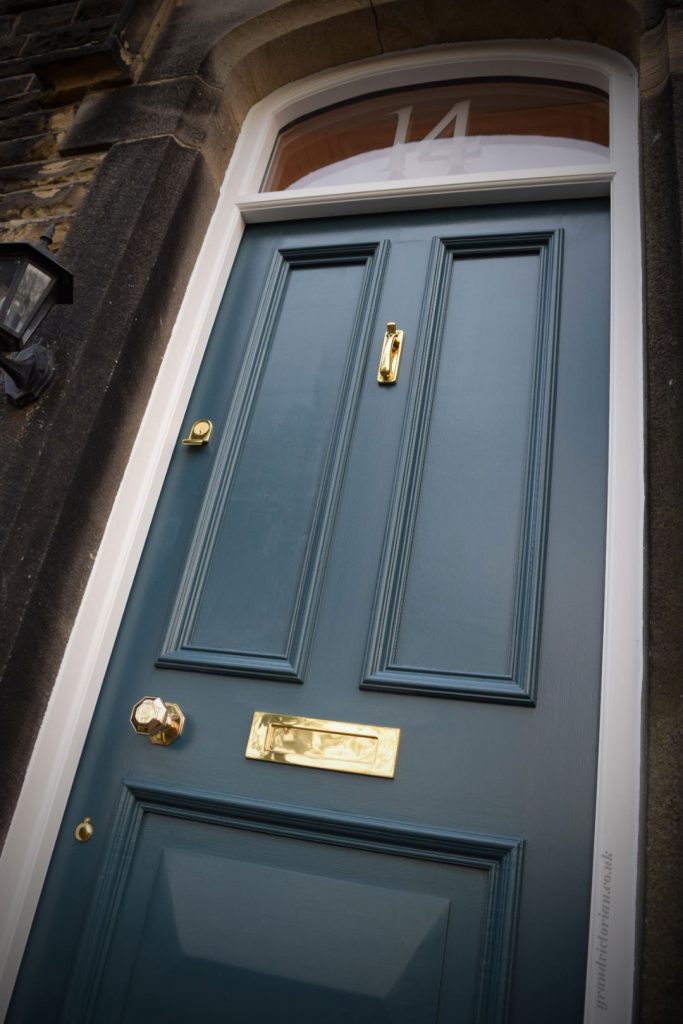 When we make a frame the door is made to fit it and everything is all fitted together in the workshop then painted, glazed and dressed with the door furniture before it goes to it’s new home. This way we hardly spend much time ‘working’ at your home at all.

The only problem with this is that until you get back to ‘site’ you’re not even 100% sure it’ll fit. Then, until you have the old frame out, you still don’t even know it’ll fit!

I fit Catherine’s door in 2016 and everything was quite straight forward with furniture, glass and colour. On site I worked into the darkness of a Winter’s evening, the frame dropped in like a sqaure peg in a square hole and I only had a few bits to do the next day. I was over the moon with the results and so were Catherine and husband Adam. That’s what it’s all about. 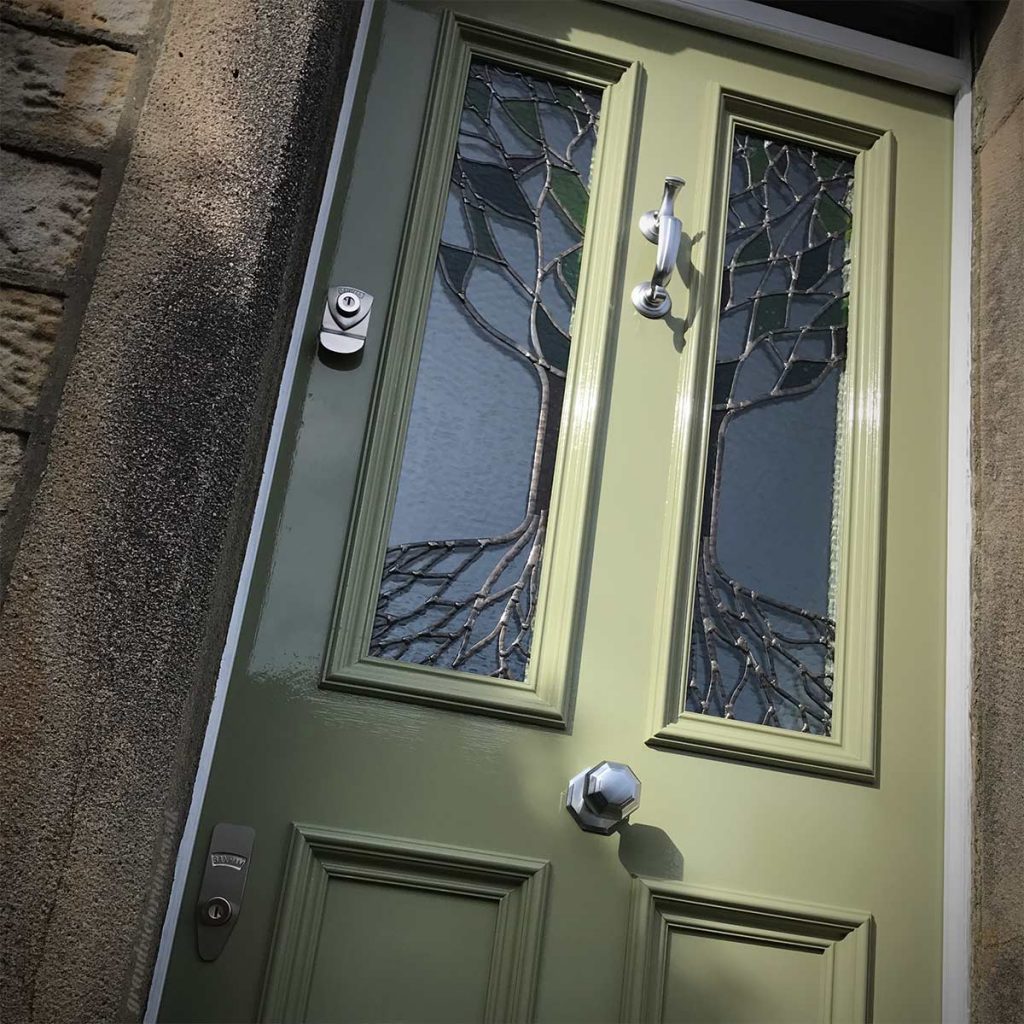 Tanya wanted a Victorian front door in the new home in Lancaster but also wanted Yggdrasil representing in the leaded glass.

Of course, we all know ‘Yggdrasil’ is the tree of life is what connects the nine worlds in Norse mythology.

After a couple of drawings we came up with this design, made it up and have something that is completely unique.

The door is finished with Banham locks for maximum security, and octagonal knob and a doctor’s knocker in satin chrome.